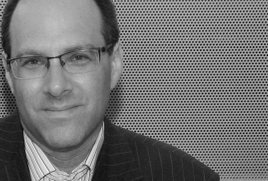 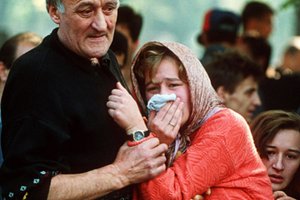 A family mourns during a funeral at the Lion’s cemetery in Sarajevo, 1992 – Photo by Mikhail Evstafiev via Wikimedia Commons 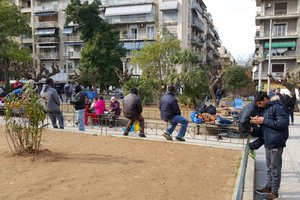 Brad K.Blitz is Professor of International Politics and Policy in the Department of Education, Practice and Society at the UCL Institute of Education, Visting Professor at the Institute of Global Affairs, London School of Economics, and Senior Fellow of the Global Migration Centre in the Graduate Institute, Geneva. From November 2017 until June 2019 he directed the British Academy and DFID programme 'Tackling slavery, human trafficking and child labour in modern business'.

In a career spanning 20 years Brad has worked on post-conflict integration and refugee returns, safety, security and access to justice in the former Yugoslavia and Albania and issues of transition, justice sector reform and the reintegration of refugees in Bosnia, Croatia, Kosovo and Serbia. His later work on refugee returns focused on the removal of and reintegration of Afghans. Brad has led global programmes on statelessness and citizenship which included research in Bangladesh, Cote d'Ivoire, Estonia, France, Germany, Gulf states, Kenya, Latvia, Lithuania, Mauritania, Myanmar, Russian Federation, Slovenia, Sri Lanka, Ukraine, United Kingdom and USA. Recent work has included livelihood studies on the costs of statelessness and the benefits of birth registration for the US State Department and Plan International respectively. He recently completed four projects including an ESRC-DFID project on the Mediterranean migration 'crisis' and reception conditions in Greece, Italy and Malta, and a large EU project on legal and procedural information for asylum seekers across six EU Member States.

A former Jean Monnet Chair at Oxford Brookes University and Research Associate in the Department of International Development, University of Oxford, Brad is widely regarded as a leading expert on refugees and stateless persons, migration, development and human rights.  He has acted as an advisor and consultant to UNDP, UNICEF, the UN Office of the High Commissioner for Human Rights (OHCHR), the World Bank, OSCE, Council of Europe, DFID, as well as several NGOs. He has also advised national governments in the Euro-Med region and has appeared as an expert witness advising UK and Australian courts, on asylum and human rights on numerous occasions.  Brad’s research has been selected as one of 12 projects which would guide and support the legacy of the Universal Declaration of Human Rights and has directly informed US State Department humanitarian policy.

Brad’s recent publications include Statelessness in the European Union: Displaced, Undocumented and Unwanted, Cambridge University Press, 2011; and Statelessness and Citizenship: A Comparative Study on the Benefits of Nationality, Edward Elgar Publishing, 2011. He is also the author of Migration and Freedom: Mobility, Citizenship, and Exclusion, Edward Elgar Publishing, 2014; 2016. 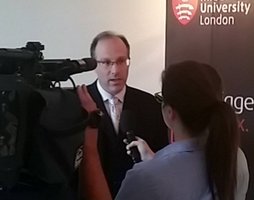 59 migrants are rescued by the crew of Peter Henry von Koss as part of Frontex’s Operation Poseidon – Photo by Kripos_NCIS (Creative Commons 2.0) 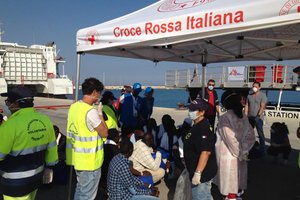